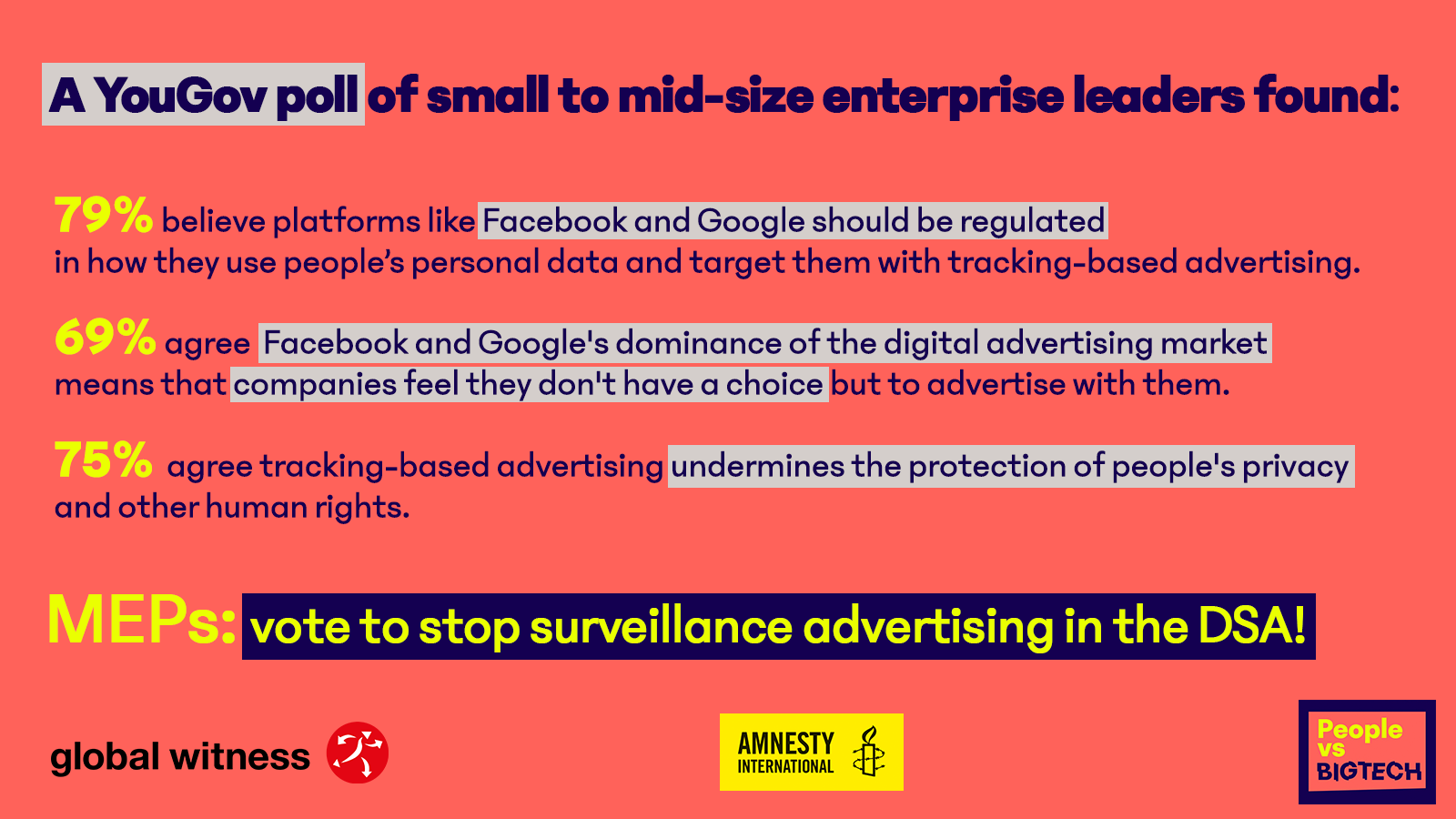 A new YouGov poll commissioned by Amnesty International and Global Witness has shown that small business leaders in France and Germany want alternatives to Facebook and Google’s dominant tracking-based advertising. The findings come ahead of a key EU vote this week on the Digital Services Act (DSA), which aims to impose stricter rules on tracking-based digital advertising and force more accountability from Big Tech companies.

Facebook and other industry leaders have emphasized their belief that targeted advertising is necessary for the survival of European small and mid-sized enterprises. But the survey shows that 79% of leaders of small and medium-sized enterprises felt that large online platforms – such as Facebook and Google – should face increased regulation of how they use personal data to target users while advertising online.

“The constant and invasive monitoring of our lives to target people with ads is unacceptable, annihilates our right to privacy, and fuels discrimination. These results show that business owners are extremely uncomfortable with the approach to tracking-based advertising that their customers currently experience,” said Claudia Prettner, Legal and Policy Adviser at Amnesty Tech. “This week’s plenary vote on the Digital Services Act represents a vital opportunity for MEPs to stand up for human rights, and to take action to address advertising practices that rely on intrusive surveillance.”

Respondents were uncomfortable with the influence and monopoly that platforms like Facebook and Google have. A total of 69% of business owners surveyed said that they felt they had no option but to advertise with them due to their dominance of the industry.

The survey also showed that business owners believed their customers were not comfortable being targeted with online ads based on their race or ethnicity (62%), their sexual orientation (66%), information about their health (67%), their religious views (65%), their political views (65%), or personal events in their life (62%).

“It’s been part of Facebook and Google’s lobbying playbook to use small business’ reliance on their services as a fig leaf to justify their invasive profiling and targeting of users for advertising,” said Nienke Palstra, Senior Campaigner on Digital Threats to Democracy at Global Witness. “In fact, our polling shows small business leaders in France and Germany are deeply wary of their ad tech practices – but don’t see an alternative. Given the overwhelming support from small business to regulate ad tech giants, there is every reason for MEPs to go further in the Digital Services Act and protect individuals from surveillance advertising.”

The latest findings support previous Global Witness polling conducted in February 2021 that investigated French and German social media users’ attitudes to targeted advertising. Those results showed overwhelmingly that people were deeply uncomfortable about the ways they are targeted by advertisers every day, from being categorized by income and religious views to life events such as pregnancy, bereavement, or illness.