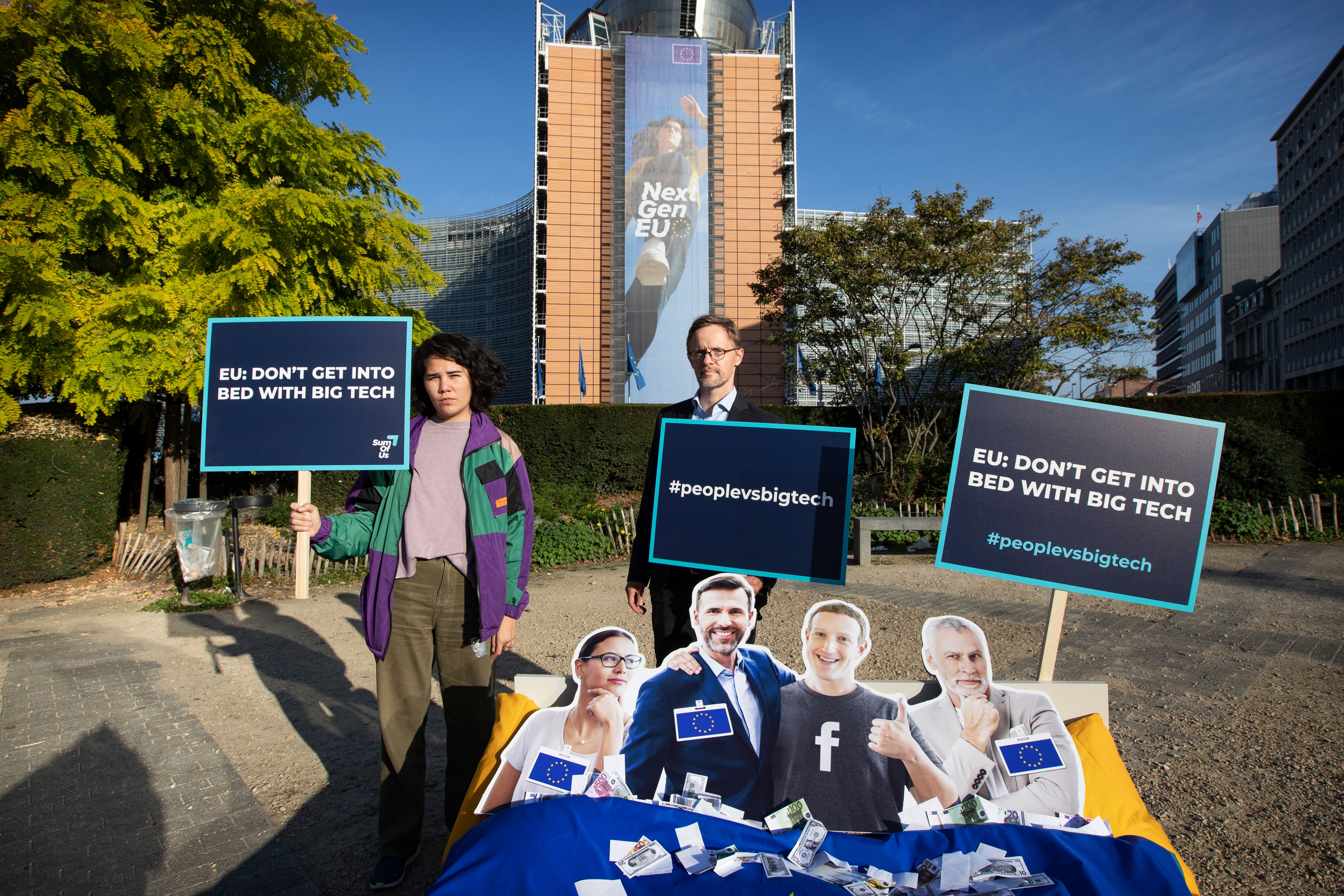 In an effort to rehabilitate its ailing reputation ahead of the critical votes on the Digital Services Act (DSA) and Digital Markets Act (DMA), Facebook is investing heavily in an alternative avenue to influence policymakers and public opinion: traditional print media. New figures from civil society transparency initiative LobbyControl show the Big Tech leader has run three separate image campaigns over the past year in Germany alone, a key state for the DSA and DMA debates. The total gross media cost of these ad buys? Nearly €7 million since European lawmakers began discussing new rules for digital platforms in December 2020. The series of ads appeared in German national dailies such as the Frankfurter Allgemeine Zeitung, Süddeutsche Zeitung, Die Welt, and Tagesspiegel.

In lieu of promoting a particular product, LobbyControl found the campaigns instead address key issues currently being discussed as part of the pending legislation packages, including personalised advertising and Facebook’s ability to tackle election-related disinformation. This approach to purchasing potential influence supplements Big Tech’s already record spending on direct lobbying Brussels -- a topic recently exposed in a report by LobbyControl and Corporate Europe Observatory. Notably, however, advertising campaigns like the ones discovered in Germany are not covered by the same reporting rules as direct EU lobbying expenditures. To increase transparency, LobbyControl is calling for Facebook to publish the details of how much it spends on image advertising across all of Europe.

LobbyControl’s original article and analysis, published in German, is available here. An English translation of the text is available below.

Facebook is using expensive ad campaigns to improve its tarnished reputation – campaigns that also aim to influence debates around stricter regulation of internet platforms. Since December 2020, when lawmakers began discussing new rules for digital platforms, the tech firm has, according to new figures from LobbyControl, run print ads with a gross media cost of around €6.8 million in Germany alone.

Around the world, Facebook is coming under enormous pressure: not only is it having to deal with the lasting reputational harm caused by an almost daily tide of damaging revelations, it also faces the prospect of Brussels agreeing stricter regulation of internet platforms. The EU is currently negotiating two legislative proposals – the Digital Services Act (DSA) and the Digital Markets Act (DMA) – that aim to establish statutory regulation of internet platforms and thus stop Facebook, Google, Amazon and Co. from abusing their power. Now the firms are fighting these proposals tooth and nail.

In an attempt to prevent stricter regulation, tech firms are spending record sums on lobbying in Brussels – more than €97 million in total. As revealed in a recent LobbyControl study comparing the 10 largest lobbyists, the tech industry is now the highest-spending lobby in the EU, surpassing even the powerful automotive, pharmaceutical and financial lobbies.

As a comparatively young, emerging industry whose roots lie outside the EU, the tech industry has to dig deeper when it comes to lobbying. It doesn’t, for instance, yet have the close ties to national governments that the automotive industry has. Instead, tech firms concentrate on attempting to sway public opinion, using not only lobbying networks comprising think-tanks, law firms and consultancy firms but also systematic ad campaigns.

In their PR and lobbying, Facebook, Google and Co. are attempting to influence the debate by pushing their own narratives around stricter regulation. For example, tech giants repeatedly state that they are expressing reservations about regulation merely out of concern for small and medium-sized companies or for consumers, rather than to protect their own interests.

At the same time, the tech giants are attempting to create the impression that they support stricter regulation, at times even backing it very publicly. A closer look, however, reveals that the firms are actually calling for self-regulation while arguing against mandatory rules behind the scenes.

As well as spending record amounts on lobbying in Brussels, Facebook is also using large-scale ad campaigns in German newspapers and magazines to improve its tarnished reputation and influence the debate around stricter regulation of internet platforms.

Just how much Facebook is investing can be seen from new calculations by LobbyControl. They show that, in Germany alone, Facebook has run image ads worth around €6.8 million in print media since December 2020. What’s more, this figure refers to gross media costs and not the actual amount Facebook has spent. It doesn’t, for instance, take into account the discounted rate the firm is likely to have negotiated (we can only speculate as to how high that might be) nor the fact that companies generally use external service providers to create such ad campaigns and that they, too, need paying.

Moreover, print advertising costs are just one part of the firm’s expenditure on these publicity campaigns, which also include online advertising, particularly on social media apps such as Twitter. In addition, the ads are being run in other European countries too. Facebook’s total spend on image campaigns across Europe is therefore likely to be considerably higher than the aforementioned €6.8 million. For comparison: according to its own figures for 2020, Facebook “only” spent approximately €5.5 million on lobbying in Brussels.

Since December 2020, when the European Commission first published its proposals on regulating internet platforms, Facebook has run three separate ad campaigns in German newspapers and magazines.

The aim of the campaigns is not to promote products but to improve Facebook’s reputation. In addition, the firm is also using them to try and sway discussions about stricter EU regulation for internet platforms – in other words, to influence politics and society.

This can be seen very clearly from the target group for one Facebook ad on Twitter, which is specifically aimed at users with similar interests to followers of @BMG_Bund, @BMWi_Bund, @BMJV_Bund, @BMFSFJ, @Auswaertigesamt and @BMI_Bund – all official accounts of German government ministries. The intended target group, therefore, is political decision-makers.

In response to our enquiry, however, Facebook denied any connection between the campaign and the ongoing discussions around new regulations: “Our aim is to highlight the positive impact our platform has on companies, communities, fundraising and research in Europe. It’s the success of these companies and individuals that is at the heart of the campaign’s messaging. Debates around legislation or regulation play no part in the ‘It’s happening on Facebook’ campaign.” The target group of that Twitter ad, however, tells a different story.

The firm’s “It’s happening on Facebook” image ads aim to directly influence the debate around new regulations for personalized advertising. What form such regulation should take is one hotly contested aspect of the Digital Services Act currently being discussed in Brussels. Those campaigning for tighter regulation include the cross-party Tracking-Free Ads Coalition, which is arguing for an end to such advertising practices.

Facebook sees this as a threat to its business model and is thus resorting to drastic language, with one ad quoting a businesswoman as saying: “If I couldn’t use personalized advertising, my sales would drop by more than half.”

Other ads in the campaign highlight Facebook’s positive role in supporting new businesses: “73% of small businesses surveyed in the EU used Facebook and Instagram to help them get started. Many increased their use of social media platforms to drive sales.”

Ads from the “It’s happening on Facebook” campaign have been running since 15 July in national daily newspapers such as Frankfurter Allgemeine Zeitung, Süddeutsche Zeitung, Die Welt and Tagesspiegel. For the period from July to late September, gross media costs for the campaign totalled €2.5 million.

In the run-up to the general election, Facebook ran an additional campaign highlighting its efforts to combat disinformation and increase transparency, thereby helping to protect the integrity of elections. Tackling disinformation and introducing mandatory regulations on transparency are two key aspects of the Digital Services Act currently under discussion in Brussels.

There has, however, been significant criticism and scepticism regarding Facebook’s claims. According to a recent report by The Wall Street Journal, the firm’s systems for hate speech detection have been fairly ineffective. Civil society organization Algorithmwatch, meanwhile, has repeatedly criticized Facebook’s lack of transparency and called for a Digital Services Act that protects public interest research into internet platforms, while introducing a legal obligation for them to make their data accessible.

Facebook, though, is using these ads to emphasize the message that it has the situation under control, and that no further statutory regulation is required.

The ads ran between 13 August 2021 and election day in national daily newspapers such as Frankfurter Allgemeine Zeitung, Süddeutsche Zeitung, Die Welt and Tagesspiegel as well as in magazines such as Stern and Spiegel. The total ad bookings for that period equate to a gross media spend of €1.6 million.

Facebook’s coronavirus campaign, too, is more than just straightforward image advertising. Early on in the pandemic, tech firms attempted to portray themselves as part of the solution and thus improve reputations that have taken a hit over recent years. Suddenly, the pandemic has cast Amazon, Google and Facebook in the role of key helpers.

In its coronavirus ads, Facebook trumpets its important role in fighting the pandemic: “We are developing resources that provide reliable, real-time information that can help to stem the pandemic.” Some of the ads also mention how the firm is working with its partners to limit disinformation around the virus.

The ads ran from early December 2020 to early January 2021. They appeared in national daily newspapers such as Frankfurter Allgemeine Zeitung, Süddeutsche Zeitung, Die Welt and Handelsblatt. The total ad bookings equate to a gross media spend of €2.7 million.

The power of the internet giants is now a threat to democracy. That’s why it’s time to regulate Facebook and Co. effectively and place limits on that power. The European Commission’s plans for stricter regulation of internet platforms are a good opportunity to do just that, but the European Parliament and EU member states need to ensure that the legislation has real teeth.

In addition, there needs to be greater balance when it comes to lobbying of the European Commission and Parliament. To achieve that, EU institutions need to take the initiative and give civil society and science a greater say. For their part, tech firms need to ensure greater transparency. Facebook, for instance, should publish details of how much it spends on image advertising across Europe.