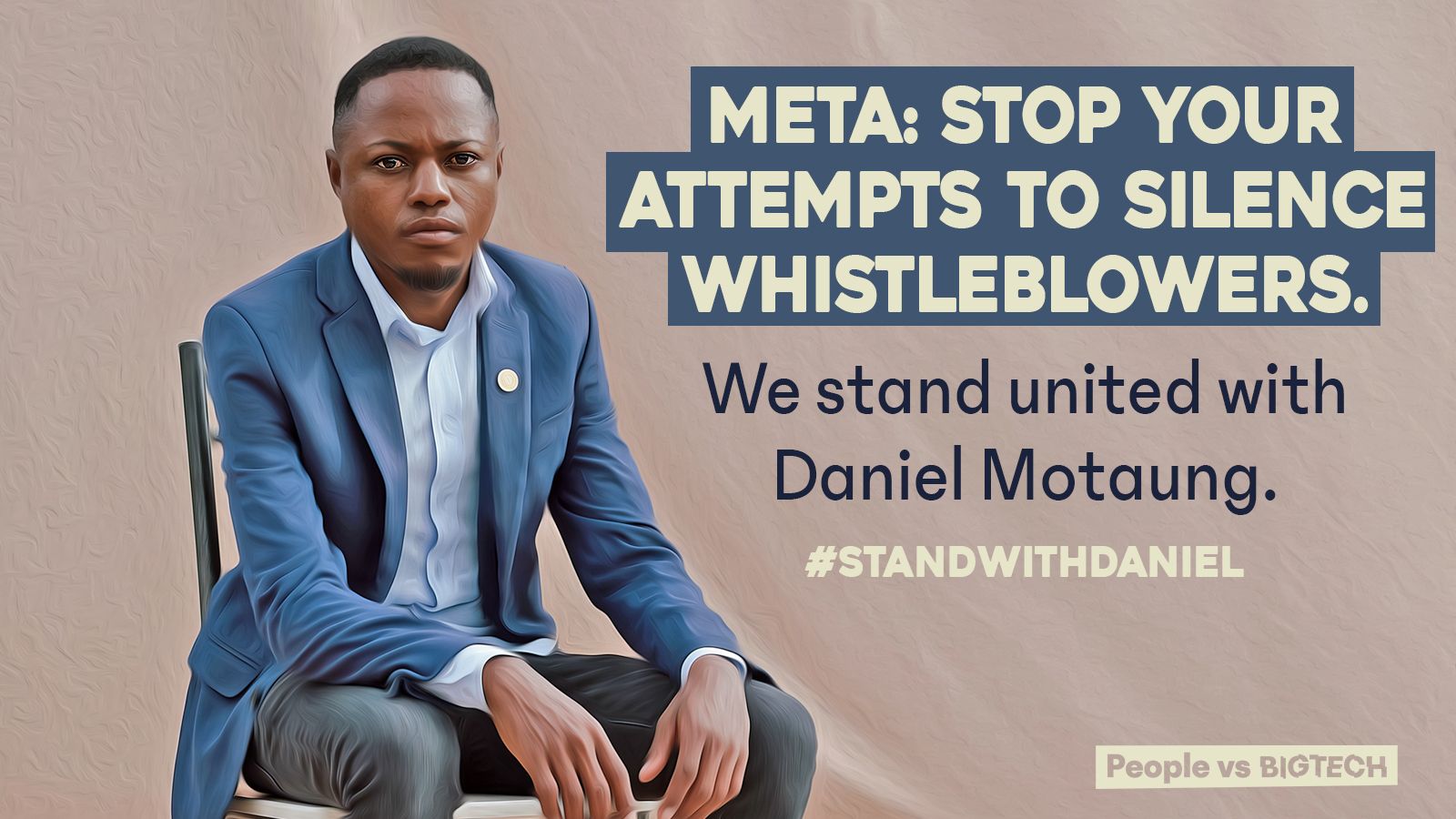 We are writing to you as more than 80 organizations, lawyers and citizens from around the world to demand that you drop all attempts to silence whistleblower Daniel Motaung and to crush his efforts to improve labor conditions for Facebook content moderators in Kenya and around the world.

Daniel is a human rights defender. He has the right to express himself freely under international human rights law and within the Kenyan constitution, as well as the right to seek justice for the abuses he and his colleagues say they experienced at your hands – working as Facebook content moderators for Meta’s Kenyan outsourcing partner Sama. It is on this basis that he is taking your companies to court, alleging that he and his former colleagues are victims of forced labor, human trafficking and union-busting.

But rather than engage with and learn from his story, your companies are aggressively attempting to silence Daniel, as well as Foxglove, the legal NGO supporting him, with a gag order and contempt of court proceedings. Your lawyers have even asked a judge to “crack the whip” against Daniel, a frontline worker who suffers post-traumatic stress disorder as a result of the work he did for you and for which he was earning just $2.20 per hour. It appears Meta and Sama would rather shut Daniel up than meaningfully address his allegations.

Daniel and the hundreds of colleagues who he is standing up for are an integral part of Facebook’s global workforce. Their relentless work sifting through the most toxic and harmful content on the platform, including beheadings and child abuse, hour after hour, day upon day, is what keeps the company in business. Their experiences should be taken seriously and they should be encouraged and supported to speak up – not fired from their jobs and gagged.

It should be a source of intense shame for Meta, one of the richest companies on earth, that it has chosen to focus its corporate clout and resources on the latter course of action. Sama, a company that professes to champion dignified work for all but has instead treated its own workers with callous disdain, should equally hang its head. It couldn’t be clearer that both Facebook and Sama view Daniel, and workers like him, as expendable.

Facebook’s treatment of a low-paid, Black whistleblower is all the more shocking when compared to its response to other whistleblowers with more privilege and profile. Frances Haugen, for example, a white former Facebook product manager who won global media attention after leaking thousands of internal company documents, has rightfully been left to speak freely. It appears to us that the company is making a racist calculation that it can safely seek to silence Daniel without causing itself a PR crisis.

Meta and Sama publicly claim to champion freedom of expression, and to support global movements fighting for equality and racial justice. It is impossible to square such statements with your actions in Kenya and with your treatment of content moderation workers globally. The first step to fixing this is to publicly affirm that you will respect Daniel’s right to speak his truth about his experiences working for your companies and to immediately cease your attempts to impose a gag order on Daniel, Foxglove and his legal team.

We also urge both Facebook and Sama to support the unionization of your content moderation workforce as a vital step towards guaranteeing fair conditions and labor rights in this hazardous industry.

Time, 1 July 2022, Facebook Asks Judge to 'Crack the Whip' in Attempt to Silence a Black Whistleblower