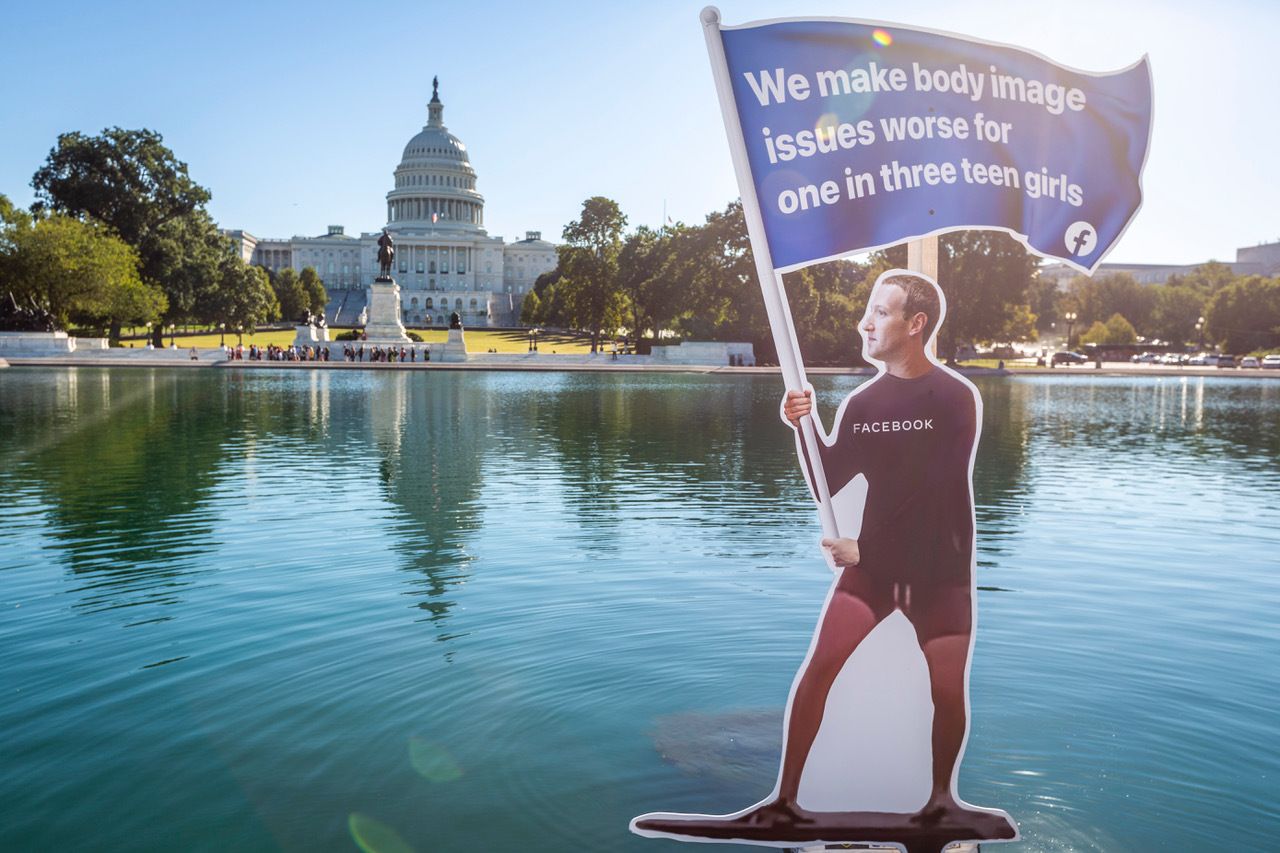 Zuckerberg Surfs on Pile of Cash on Capitol Reflecting Pool

Washington DC -- On Thursday, as members of the Senate Subcommittee on Consumer Protection, Product Safety, and Data Security met to discuss the negative impact social media is having on children, SumOfUs erected a 7ft visual protest outside the US Capitol depicting Facebook CEO Mark Zuckerberg surfing on a wave of cash, while young women surround him appearing to be suffering. The visual is a satirical recreation of the viral image of Mark Zuckerberg surfing while holding the US flag.

More images and video of the action can be found here. See image captions for appropriate credits.

A new report from SumOfUs shows how freely available Instagram makes content promoting eating disorders, plastic surgery, and skin whitening products to young women and teens. The report, which can be found here, shows the continued ease with which eating disorder propaganda circulates on Instagram -- with dozens of hashtags leading to potentially over 45 million posts.

This new research comes two weeks after the Wall Street Journal published a report about Facebook’s own research on the harmful impact Instagram has on young women.

Out of the 240 posts the researchers analyzed about eating disorders, 86.7% promoted unapproved appetite suppressants.

Other key findings from the SumOfUs report include:

The SumOfUs report’s identification of dangerous content did not require special access to the site but was done by simply using the standard, public search for the terms teen girls are using. Instagram did the rest, serving up algorithm driven content recommendations that form a virtual textbook for self-harm.

Rewan Al-Haddad, Campaigns Advisor for SumOfUs said: “Facebook and Instagram are inflicting severe damage to the physical and mental well-being of young people, especially girls -- all to serve a business model that is hell-bent on maximizing profits. Instead of protecting their users, Facebook execs are whitewashing this very serious matter with meaningless measures.”

Facebook has little motivation to remove harmful content, as long as it risks undercutting profits. And without any transparency, audits into its technology and processes, and zero to none accountability measures, the company has and will do very little to genuinely tackle the serious threats its platforms pose to society.

SumOfUs is calling on Congress to urgently pass tighter regulation of these platforms -- including by forcing platforms to provide greater transparency and user control on recommender systems, stopping surveillance for profit, and allowing independent auditors to assess the platforms’ tools, algorithms, and processes.

SumOfUs is a people-powered campaign organization, fighting for a world where mega-corporations are not able to ride roughshod over ordinary people’s lives. Our members care passionately about the fight for a better internet, and over 400,000 SumOfUs members have signed petitions calling on legislators to bring these billion-dollar tech giants to heel.